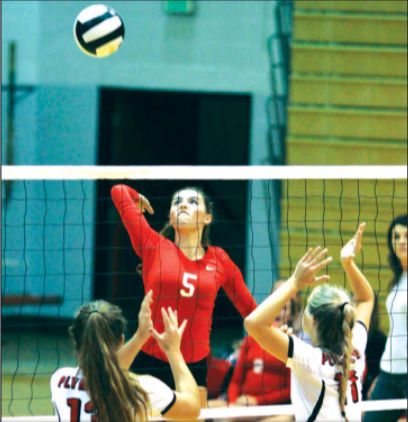 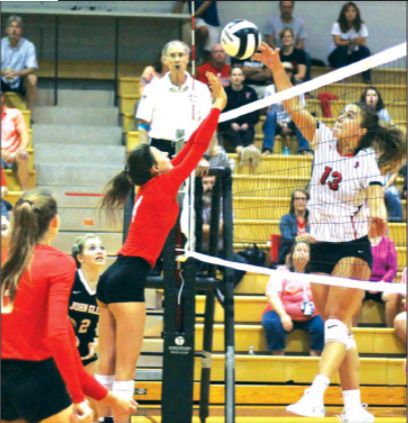 Plymouth's Alaina Clady skies for the kill in action at John Glenn.

Plymouth's Alaina Clady skies for the kill in action at John Glenn.

WALKERTON — Although sectionals for high school volleyball are still two weeks away, local fans were treated to a playoff-quality match Monday night when Plymouth traveled to John Glenn.

Led by the hitting of Miranda German and Alaina Clady, the Lady Pilgrims came away with the four-set win over the Lady Falcons at raucous TCU Gym.

“It was an exciting match,” said Plymouth head coach Jon Hutton. “It was a nice night, but give Glenn a ton of credit. They played very sharp ball. They played smart ball. They served well. That was a lot of fun. That’s a good Monday night.”

The Lady Falcons are having one of the best years in school history and got the attention of the visiting Lady Pilgrims by taking the first set, 25-22. With Jorjia Ayers serving and kills by Madison Platz, Julianne Wilk and Raegan Romer, the home team used a late 11-3 run for the gap they needed. Wilk had five of her match-high 12 kills in the first set.

“Glenn played fearless,” added Hutton. “They played bigger than they were. They played good defense, but when we connect, we’re pretty hard to find an answer to sometimes.”

Set two had 11 ties, the last at 19-all, but Plymouth was in the midst of 9-2 finish, keyed by fine net play from Clady.

“Alaina had some good moments defending and whammed the ball,” Hutton said of the senior. “It was exciting. She is such a presence and always a threat. She’s a great player and teammate.”

Glenn had a late 6-1 run in set three, but the Lady Pilgrims were hitting and blocking and serving - on all cylinders in this game. It was tied at 5, but then Plymouth went on an impressive 18-6 flurry to win going away. German had four of her team-high 11 kills during the third set. Chloe Holten was part of three blocks during the big run as well.

“Miranda carries a lot of the load sometimes, but she wants the ball,” continued Hutton. “That’s what you want to see from a player.”

The fourth set was tied at 2, 4, 6, 7, and 8, when the Lady Falcons outscored PHS 9-3, led at one time, 16-11, and it looked like the match would need a fifth set to decide it. Kills by German and Holten, plus strong serving by Sydni Weir helped Plymouth pull even at 18-all though. From there, it felt like a sectional final. There were five more ties before the Lady Pilgrims strung together three points to eke out the 27-25 match-ender.

German had four more kills in the final game, with Madison Figg and Clady each pounding three apiece.

“There was some good blocking by us,” Hutton said. “We ran a little different lineup with Clare (Sheedy) out with an injured ankle, but Syd (Weir) did a good job in her place. We ran the bench so everybody was contributing.”

Plymouth next heads to Triton on Wednesday while Glenn is back on its home court Tuesday night for an NIC match with South Bend Clay.