Sign Up
Log In
Purchase a Subscription
You are the owner of this article.
Edit Article Add New Article
You have permission to edit this article.
Edit
News
Sports
Entertainment
Multimedia
Obituaries
Classifieds
Best of 2020 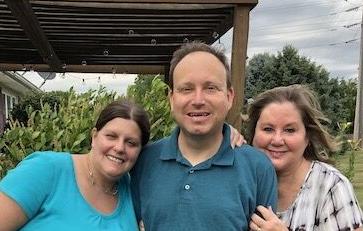 Update to this story: A match has been found for Dan Ley. Dan shared his story of faith and hope with the Pilot News Group earlier this year. We are pleased to report that he is in the process of a kidney transplant. The family has thanked God for answered prayers and has asked for continued prayers.

Below is the original feature article with no changes for those who did not have the chance to read it; or who had and would like to read it again.

PLYMOUTH — Terry (Winter) Ley is on a mission to find a kidney for her son Dan who is suffering from end stage 5 critical renal failure. Her vision is to spread awareness about the living organ donor program to save as many people as possible from kidney failure.

Dan is 41 years old and fighting for his life. About a decade ago Ley started experiencing uncontrollable high blood pressure. After physicians could not bring his condition under control he was sent to nephrologists for diagnostic testing to determine the underlying and persistent problem.

Ley was diagnosed with stage three chronic kidney disease on November 27, 2013. By December 2014 a kidney biopsy revealed that 70% of Dan’s kidneys were damaged with scar tissue otherwise known as fibrosis.

It was at that time that Ley was ultimately diagnosed with focal segmental glomerulosclerosis nephrotic syndrome with no known cause. Glomerulosclerosis is the scarring of the filtering part of the kidneys (glomerulus). The condition leads to the loss of protein in the urine. That protein is what helps fluid remain within the blood vessels. Without those proteins, fluid leaks into nearby tissues which causes swelling.

Kidneys cannot be repaired from scarred glomeruli so treatment focuses on prevention of further damage and to avoid dialysis.

Ley’s kidneys had deteriorated dramatically to stage five by late 2017 at which time he was placed on peritoneal dialysis. A port was placed surgically into Ley’s abdomen to facilitate dialysis. Ley is on dialysis ten hours a day seven days a week to filter his blood now that his kidneys cannot perform that life sustaining function. He has increased from two bags of treatment to three bags which is time consuming and costly. It takes up to twenty minutes every night to set it up properly.

Ley was no longer able to work. He qualified for disability even though he was under the age of 65 due to his end stage renal disease (ESRD). Ley was approved for the transplant list in October 2018. That process is excessive and he must qualify annually.

United Network for Organ Sharing (UNOS), a private non-profit organization, manages the nation’s organ transplant system. To date there are over 90,000 on the kidney transplant waiting list. Of that, almost 1,300 Hoosiers are waiting for a kidney transplant.

The average wait for an organ transplant is five to ten years. Dan has been waiting for two (since October 2018). Terry said that most people don’t survive ten years on the donor list. “Your organs eventually can’t take it.”

Patients are prioritized by how long they have been on the waiting list, their blood type, the strength of their immune system and several other factors.

After a successful transplant Ley would be placed on immunosuppressant (anti-rejection) medication for the rest of his life. On average, a kidney transplant from a deceased donor will function properly for ten to twelve years. A kidney transplant from a living donor averages closer to fifteen. That means that patients may have to repeat the process during the course of their lifetime.

It is reported that people are more likely to live a life more similar to the one they had prior to their disease after a kidney transplant as opposed to continued dialysis treatment.

It is reported that a healthy individual can function properly with one kidney. Terry is asking for those with a willing heart to consider becoming a living donor. The first step to be considered for that process is to complete an online donor evaluation form which can be found online at iuhealth.org. It is important to list Dan Ley as the hoped for recipient. The medical expenses accrued through the living donor process would be absorbed by Ley’s own insurance.

Individuals who have questions about qualifying as a living donor for Dan are asked to contact the IU Health Kidney Transplant Program at 1-800-382-4602.

Terry has continued to work past her hoped for retirement to continue to supplement the financial needs of her son. She worked for Pathfinders services for 18 years in administration. After her husband Gene passed away she left her management position and continues to work PRN several days a week. “I try to help them as much as I can.”

There have been times that Terry has helped with gas money or food. She has paid for vehicle repairs using her credit card. Dan suffers emotionally with each setback with so many barriers medically and economically. Terry continues to remain supportive of her son. “Things happen to all of us. But on such a limited income it’s hard for him.”

Terry has already buried her husband. She does not want to lose her son. “I have had many sleepless nights.” She smiled softly as she expressed hope that a donor would be found. “As a mother, I worry all the time.”

Terry and Dan’s sister, Emily, do not qualify as donors. Terry said, “It gets really frustrating.” Terry had shirts printed in the hopes of finding a donor for her son. “I am going to Gatlinburg with friends in September and thought we could wear them. Hopefully someone would see them and be interested in saving a young man’s life.”

Ley continues to suffer from decreased energy and significant weight loss. It is a challenge for Ley to find opportunities to embrace his life fully. He must remain within 5 hours of Indianapolis where the transplant would take place if a kidney from a deceased donor becomes available. Dan said, “I try not to think about it as being insurmountable. It definitely seems that way, but it’s hard to say.”

Dan is not currently in a lot of pain, but he has trouble breathing and is easily fatigued. Though fund raising opportunities have been restricted and limited by the pandemic, Dan’s kidney disease has not. Treatment is time consuming and expensive. Gas cards and monetary donations would be greatly appreciated.

Terry asks for prayer from those with a willing heart. “I so believe in prayer. I also believe everything is a gift from God. I may not know why these things happen in life but God has a plan for all of us.”