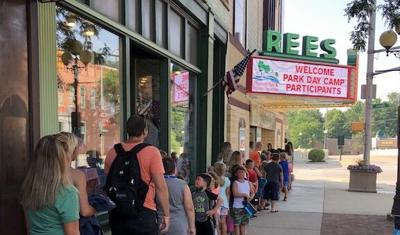 PLYMOUTH — More than 40 campers from Plymouth Parks and Recreation were the first to take a tour through the new tunnel in the REES Tuesday. REES co-chair Randy Danielson, volunteer Linda Starr, and volunteer Sean Hatfield led the children through a tour of the building and shared the history of the theater, the renovations taking place, and exciting things to look forward to for the future.

After reviewing bids for the final phase of renovations, the REES still needs $806,522.00 to complete the restoration of the building with limitless possibilities.

“Bids for the fourth and final phase in order to once again open the doors of The REES were received this past week and to no surprise it was more than a three year old budget number.  Submitting bids were Michiana Contracting, R. Yoder Construction and Brown & Brown General Contractors Inc.  The low bid received was from Brown & Brown of Wakarusa, Indiana with a base bid of $2,386,000.

A meeting of The Rees Theatre Inc. immediately followed and work has begun to review ‘value engineering’ with the contractor in an effort to reduce that number to the needs in getting The REES ready to serve guests.  It was announced this week by REES Project co-chairs, Randy Danielson and Donna Pontius that this effort will carry on. ‘The REES committee along with the many supporters and volunteers of this project have come too far over the course of the past four years to pause now.’  said, Danielson. ‘We owe this extra fundraising effort to the citizens and business community to see this project to completion. We knew that with all that has transpired over the past year with materials and even questionable availability that a phase four construction budget of $1.7M would not hold up. This number and the addition of furnishings and equipment puts us at a need for $806,522.00 in funding. This project has gotten this far from the generous support of individuals, businesses and corporations with recorded in-kind gifts of over $531,000. and countless volunteer hours. ‘Our mission has not waivered since the launch to Save The REES in December of 2016.’ said Pontius.

‘Saving this iconic structure is critical to the evolution of our downtown and regional business community enhancing our overall quality of life,’  Mayor Mark Senter echoed.

The REES Project has been the recipient of grant dollars from the City of Plymouth – Redevelopment Commission, Marshall County Community Foundation, and Regional Cities Initiative and most recently was named a hallmark project by Marshall County CROSSROADS Stellar Initiative.

Danielson concluded by saying; ‘We are all anxious to get this entertainment facility open and once again serve to the delight of all generations. I have faith in the visionaries of this community who are passionate about creating great hometowns.’ [End of Press Release]

Volunteers and REES supporters expressed enthusiasm that children were once again seen in a long line awaiting entry to the REES to celebrate its former grace and look forward to its future glory.

“We want to move forward. We really want the community to rally now at this time.” said Danielson. He emphasized the tremendous support that the effort has already received. “We are over $531,000 of record in-kind gifts, materials, and services. It’s not just the numbers that we have raised dollar wise and grants. It’s just such a big picture and I think that those people need to be thanked and know that they are recognized.”

The project is in its final phase. “The theater itself is too critical. It’s too critical for not only our quality of life, but for the business community. We just cannot pause this any longer.” To donate go to www.reestheatre.com. Individual and group tours can be scheduled by emailing reestheatre@gmail.com.