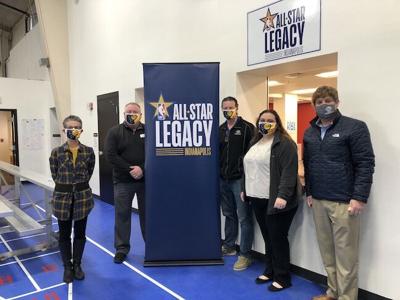 MARSHALL COUNTY — The Boys & Girls Club of Marshall County - Plymouth Unit celebrated the completion of the grant funded gym renovation that will enhance the experience of the club for members, families, visitors and guests for years to come.

The club was one of 21 organizations out of 182 applicants awarded a $50,000 youth-focused grant from the Indianapolis NBA All-Star Legacy Committee. Boyce said that the mission and vision of the All-Star Legacy Host Committee is to promote that basketball is so much more than just a game behind the court. “We wanted to make sure that we had projects from all over the state and of different varieties.” Validating that Indiana is passionate about basketball; the grants funded multiple and diverse projects including upgrades to an Equestrienne Center and served youth from all walks of life.

The club gym was upgraded with an 8-foot high glass wall that will provide a physical separation between the activity on the gym floor and the spectators.

The new wall allows clear visibility; including for those who use a wheelchair for mobility; making the gym ADA accessible both physically and visibly.

“We were just so thrilled that out of all the applicants that we were selected here in Plymouth and Marshall County.”, said Patrick. “The biggest part of the excitement for us was this wall. Now kids and parents, even if they are in a wheelchair, everyone can see the games. There is no more wooden wall here that you can’t see over, even from the front row. That was the most exciting part.”

The upgraded wall and gymnasium are Americans with Disabilities Act (ADA) compliant. “It was also exciting to know that anybody who needs to roll up a wheelchair and watch — they can do that. It’s all ADA compliant with the doors, the access, the ramps and the glass. It’s just exciting.”

A permanent concession was constructed in to the back wall behind the risers where individuals and families will be viewing the game without the former obstruction of a wood wall. Youth learn entrepreneurship and management skills by selling foods and beverages; a means of raising funds for leadership programs while at the same time learning how to operate and manage a business. Members also learn customer service skills as they engage and interact with club parents and visitors.

Fitzpatrick said, “The teenagers do the entrepreneurship program where they sell concessions to raise money. Before COVID they would go to Leadership Conferences every year. They raise money for that. This was one of the ways they raised money. They would run their concessions during our leagues. They had to roll out all the stuff on a cart. The hot dogs and the popcorn — all in the middle of the floor. Now they don’t have to do that anymore. It’s safer. It’s more sanitary. It’s in the kitchen. It protects the cash box, the food, and it keeps everything cleaner.”

The NBA All-Star 2021 Legacy Committee designated parameters for the grant opportunity to focus on a legacy even after the game is played. The projects were dominantly brick and mortar; as there are already a multitude of grant opportunities for programming. The infrastructural projects focus on health and wellness or education and will have a positive impact on an estimated 90,000 youth across Indiana.

In addition to the (21) grants awarded, the NBA All-Star Committee also awarded (21) $2,100 scholarships to a “Rising Star” affiliated with and nominated by each non-profit organization that was awarded the brick-and-mortar grant. Those “Rising Star” recipients will be announced publicly in March during a virtual awards ceremony. Please look for that coverage in a future edition of the Pilot News.